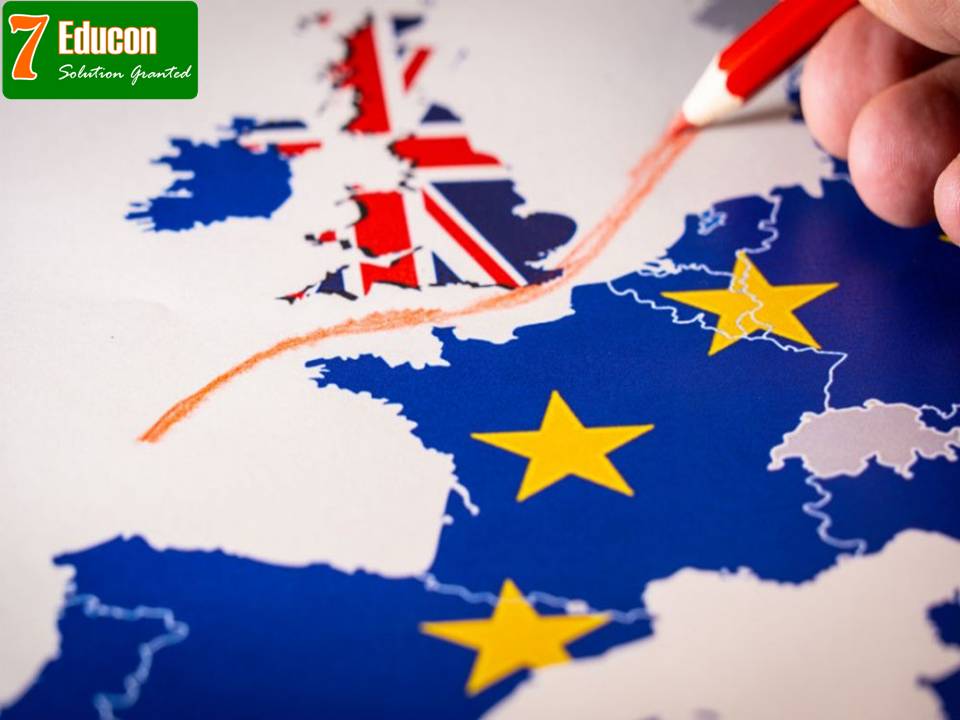 In June 2016, the British public voted to leave the European Union (EU). To help you make sense of how Brexit affects young people, particularly in higher education, we've put together a quick guide to what EU membership and Brexit means for universities and students.

Since 1973, the United Kingdom had been a member of the European Union (originally the European Economic Community). Over the years, politicians and citizens became increasingly ignorant of advantages while becoming increasingly dissatisfied with perceived disadvantages. In 2016, that development culminated in a popular vote on “Britain exiting” the EU (hence “Brexit”), won by those in favour of the Brexit. This means that the UK will leave the European Union.

What is Brexit?
Brexit is an abbreviation for "British exit," referring to the U.K.'s decision in a June 23, 2016 referendum to leave the European Union (EU). The vote's result defied expectations and roiled global markets, causing the British pound to fall to its lowest level against the dollar in 30 years. Former Prime Minister David Cameron, who called the referendum and campaigned for Britain to remain in the EU, announced his resignation the following day. Home Secretary Theresa May replaced him as leader of the Conservative party and as Prime Minister. Following a snap election on June 8, 2017, she remains Prime Minister.

Who is affected by Brexit?
However, if you are an EU citizen, you are currently treated the same way as UK students. That has previously meant fewer regulations and lower tuition fees. It is very likely that Brexit will change this comfortable situation for the worse. However, it is currently unclear just what exactly the effects will be.
Will tuition fees in European universities be affected?’
Fees for British students will be the same as those paid by other EU students until the UK officially leaves. There is less certainty about what will happen after Brexit, especially if Britain leaves the European Economic Area (EEA).

But it’s important to consider different EU countries separately: a change to fees is unlikely in Germany, for example, since study there is free to students of all nationalities. In other EU countries, though, individual governments or institutions may take a harsher stance on British students’ fees.

What are the different options for students who finish their course from a university in the U.K. in terms of visa?
Thousands of graduates each year successfully transfer from a visa of study in U.K. to a post-study work visa, with nearly 30,000 companies across the country licensed to sponsor students. Graduates can stay and seek work for up to four months after the completion of their course, although most students start job hunting well before they graduate.

To move onto a tier 4 work visa, graduates need to secure a job paying at least £20,800 a year, and there are plenty of jobs in London paying at or above this level. Indications are that major U.K. employers are likely to increase recruitment of international graduates, not least because of their international outlook and language skills.

Indian students studying in UK anyway needs a visa to travel (Schengen Visa Type C) or work (Schengen Type D) in most of the European countries (Schengen Zone). Likewise Indian students in Europe again needs visa to enter the UK (study, travel or work). Brexit will hardly make any difference to the current scenario for the Indian students. Yes, Indian nationals who want to do research (PhD or Postdoc) in the UK might face some issues due to further cut in research funding (but this is a speculation only).

On the contrary, Indian (and other Non-EU) students might gain from the Brexit. The GBP-INR rate has fallen down from 102 to 91. Hence, Indian students can save more than 10 - 16% in your overall study costs. It will be similar for other non-EU students (from China, Korea, Brazil etc.). European students will now need to pay more fees in order to study in UK as they will be considered as International Students. They will also need a Visa in order to work in the UK. So, Indian (and non-EU) and EU students will now have equal opportunities. Therefore, Non-EU Students will have more job opportunities than now.

A British degree also means there are plenty of opportunities for students returning to India, who on average achieve much higher starting salaries than non-U.K. graduates. There is great scope for human resource management in the UK.

Number of Jobs for Indian and Non-EU Students is Likely to Rise
Now, EU students will also need a visa (or work permit) in order to work in the UK. So, that will ease out a little bit of competition for the Indian and non-EU students. When it comes to job recruitment, first preference used to go to UK nationals, second preference for EU nationals, and international students including Indians used to get the last preference. Now Indian students and European students are likely to get the same preference. So, qualified and skilled Indian students will find it easy to get a job and stay in the UK. (Top 10 HR companies in Mumbai)

Unemployment in the EU has been on a rise due to skill gap. many EU students use to migrate to the UK for job opportunities.The number of EU nationals working in the UK is around 2.1 million .According to FT, 6.8% of UK workforce is from another EU country. Following Brexit, few hundred jobs can easily go to qualified and skilled Indian students. According to reports from Guardian and Telegraph, 25% of employers said they would be likely to increase recruitment of British and international graduates.

You can take help from overseas education consultant for uk in Mumbai who will assist you with the admission and visa processes. All the best for your future endeovours!
Share this: