Places you must visit when Studying Abroad in Australia 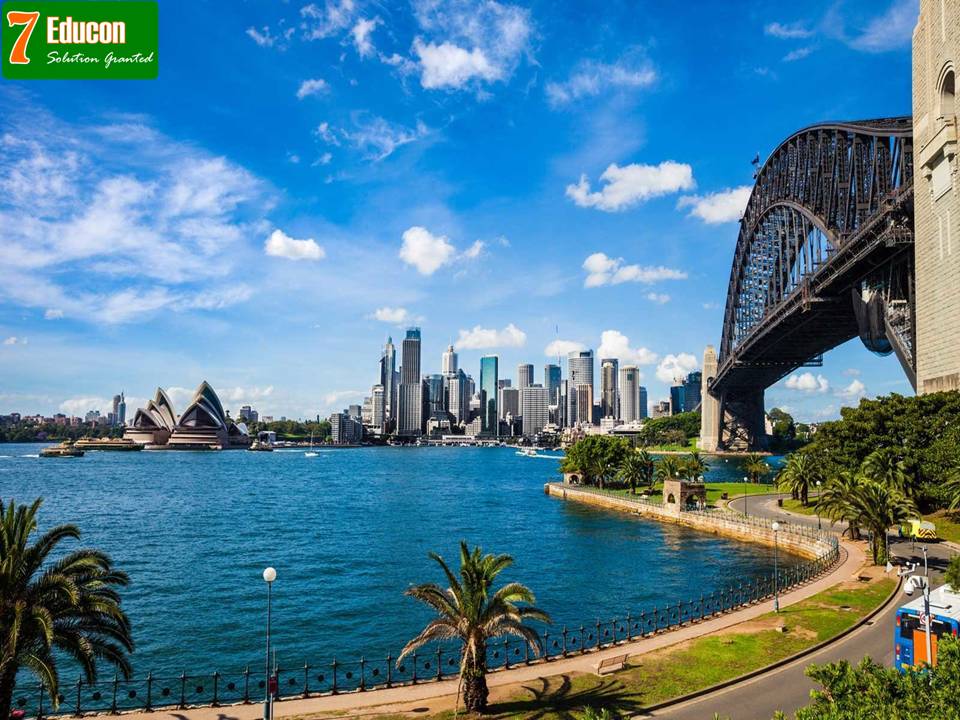 Getting to Australia requires a lot of patience – and a good neck pillow! The most common flight path is from LAX with a flight lasting up to 14 hours. However, once you land, there are tons of great places to live, study or just visit for the weekend! Here are some “can’t miss” places in Australia that most study abroad students explore. Australia is the perfect place to indulge in a bit of travelling in between your exams. Here are some of the best places to visit – make sure you don’t miss your chance to experience them!

Sydney Opera House, Sydney
Often the first thing people think of when they think about Australia, the Sydney Opera House is a truly iconic piece of architecture. With crystal waters surrounding it on all sides, the Opera House is a beautiful structure, and that’s not even mentioning the fact that it showcases some of the world’s best performance art!
You can also see the majestic Sydney Harbour Bridge alongside, which makes for an unforgettable view, but if you really want something to make others envious, take the guided tour around the Opera House before taking in a show.(Job Placement consultancy in India)

Australian Alps, Victoria
Straddling eastern Victoria, southeast New South Wales and the Australian Capital Territory, the Australian Alps are both an IBRA bioregion and the highest mountain range in Australia, and they’re well worth a visit.
The range stretches for almost 2,000 miles, and creates a true winter wonderland. You can get there easily from Melbourne and it’s definitely worth it for the extreme sport thrills alone! You can indulge in a spot of skiing, snowboarding, sailing, rock climbing, canoeing and even water skiing, so get out there and enjoy the outdoor adventure!

Great Barrier Reef, Queensland
Here’s how your holiday planning should go – book your air travel at cheapflights.co.uk, book your hotel, get on the plane, get off the plane, dump your bags, grab some flippers and scuba gear, then head straight down to the Great Barrier Reef. That’s how amazing it is!
Stretching for well over 2,000 kilometres, the Great Barrier Reef is the largest coral reef in the world, and is home to many a unique sea creature. Come find Nemo: the clown fish is native to here! Once you’ve had your fill of underwater exploration, kick back on one of the many gorgeous beaches in the region and top up your tan.

Lone Pine Koala Sanctuary, Brisbane
Recently rated as one of the top ten zoos on the planet, the Lone Pine is the world’s first koala sanctuary, housing around 150 of the little cuties! You can get up close and personal with some of the miniature marsupials – cuddling is not just allowed, but encouraged!
You can also feed kangaroos by hand, and encounter some other fabulous species like the brightly coloured lorikeet and the natural enigma that is the platypus! You can even pet some of them for a real hands-on experience.

The Rocks
A very important part of immersing yourself in a new place is getting to know the local social scene, so be sure to check out The Rocks while in Sydney. This borough of Australia’s most populous city is also the oldest part, where settlers first landed on the continent. The streets are made of cobblestones and the buildings are over 200 years old! On the weekends, street fairs and markets flood The Rocks with live music, fresh food, and gregarious Aussies and tourists alike looking to socialize and enjoy the atmosphere. Historic walks, souvenir shops, and plenty of themed pubs make The Rocks a must-see place in Sydney.

Sydney
Sydney is the state capital of New South Wales and is the most populous city in Australia. “Sydney is similar to any other major city in the sense that you’ll most certainly always find an activity going on; whether it be a new band playing, a new bar to met up with friends, or a new market to explore,” says Aussie abroad-er Jess Shoflick. Sydney is also home to the iconic Sydney Opera House and surrounding botanical gardens, Sydney Harbour, and access to some of the most beautiful beaches in the world- particularly Bondi Beach. Similar to a mini-NYC, Sydney is home to different neighborhoods, such as Surrey Hills for a more hipster crowd or The Rocks if you’re more modern or traditional. Weekend trips to and from Sydney are very possible (and encouraged!) so take advantage of the various beaches, go surfing, kayaking, or even snorkeling!(Core HR Training)

Darling Harbour
Darling Harbour is about a 10-minute walk from Sydney city center, and home to one of Sydney’s largest dining and entertainment districts. There are plenty of restaurants, bars, nightclubs and other shopping centers to enjoy any night of the week, and Cockle Bay Wharf has waterfront promenades with open-air dining. You’ll probably see a good amount of tourists, but it’s definitely a fun place to spend a night out.

Coogee Beach
Imagine yourself relaxing on a picturesque Australian beach, the fresh Harbour air cooling you down as you observe fellow beachgoers picnicking, playing Frisbee, and enjoying the historic “ocean baths.” All that could be a reality if you choose to “study” abroad in Australia. While Coogee is notorious for jagged shores that form “Wedding Cake Island” and responsible for destroying the 180-meter Coogee Pier in 1934, the area is also the perfect access to parks, cliffs, and other smaller beaches. Aussie abroad-er Maci Katz lived in the heart of Coogee Beach, and recalls afternoons of grilling out with her housemates and taking the three to five mile walk to Bondi Beach as some of her favorite Aussie memories. She says, “When my roommates and I would come back from a long weekend away, we would always say how happy we were to come home.”

Melbourne
The second most populous Australian city of Melbourne is located farther south on the Eastern coast than Sydney, and has been consistently ranked among the world’s “most livable” and “most expensive” cities. Melbourne is a haven for arts and culture, and offers a more “European” vibe than other Australian cities, and is even comparable to Boston with narrow streets and a nearby river. Spend your days exploring the little nooks and crannies of the area, enjoying festivals and live theater performances, and be on the lookout for the famous graffiti alleyways!(Education consultants in mumbai)

Great Ocean Road
Built by veteran soldiers between 1919 and 1932, Great Ocean Road is actually the largest war memorial dedicated to the soldiers killed in World War I, stretching 243 kilometers (151 miles) along the southeastern coast of Australia. If you have a few hours to kill and want to experience the coastline, rent a car and get driving! Comparable to California’s Pacific Coast Highway, Great Ocean Road makes a perfect day trip, with large cliffs on one side and the sweeping ocean on the other. Along the way, stop at beaches, famous lighthouses, and rock formations, especially the Twelve Apostles– large rock structures that broke off the shore and moved out to sea.

That concludes our list of the best places for students to visit when studying in Australia. Now remember these are in our opinion (and we’re experienced). There is obviously a ton more places to visit and explore when you finally get here, but we’ll leave that to you!
If you are seriously coming to Australia to study, then head to our Study in Australia page for more information on how you can get started… It’s not as complicated as most think.
Share this: